A deer call is really nothing more than a hunting technique that uses sound to lure deer. Hunters have used it for thousands of years using grunt sounds to pique the curiosity of deer.

Recently, though, deer calling has evolved as hunters use instruments to generate sound. If you search for “What is a deer call” on Google, you will see that there are many websites out there that teach you how to make game calls, from doe bleats to buck grunts to snort-wheezes.

There are even YouTube videos you can watch to see how deer calling is done. But no matter what your technique is, you will need decent deer call equipment to attract your prey.

That’s why we compiled a list of 5 great deer calls that should get you started on the right foot.

Going For A Deer Hunt? You’ll Need This Deer Call! 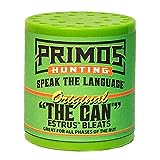 Let’s dive into the specifics and review each deer call individually. You can use the list below to jump and review specific models, or you can read along and go through all the information.

Deer calls aren’t easy to make, they’re not like duck calls at all.

While they are more complex, that makes them more versatile in almost every single situation.

The Extinguisher deer call is almost an all-in-one product designed to call bucks, doe, and fawn with a simple adjustment.

Change the tone and pitch to detect different kinds of prey by pulling them out of their hiding places.

Whitetails usually stay within a half-mile of their homes, so if you see a whitetail deer and it gets away from you, the Extinguisher will help lure them back out.

As one of the top-rated deer calls in the United States, it comes with a throat tube to create those realistic sounds, and its high quality is approved by the NAHC with a rating of over 99%.

With the ModiSlide, you can execute a call with ease, and rest assured that the freeze-free design will help you out whether you are bowhunting or carrying a rifle, even in the frigid cold.

Looking for something just as powerful, but less technical?

We ranked the Extinguisher at the top of the list because it’s simply the best in terms of versatility, but Nationwide Scents is the most comfortable and enjoyable one to use.

It produces a low grunt that calls over bucks and does alike.

Pop the wooden cap off and grab the whistle by the handle, then adjust the o-ring on the inside so you can mimic different tones and sounds.

Put the cover back on and pull the lanyard over your neck so you can keep it close by and call your prey when you’re ready.

Nationwide Scents includes a money-back guarantee with your purchase.

Deer calls are pretty hard to mess up; either you made a good one, or nobody ever recommends your products in the first place.

We’re confident in its quality, and we’ve used it ourselves with excellent results.

Choose from fawn to doe, and immature to dominant buck.

There’s a different tone for each, and only Hunters Specialties can truly differentiate between those two latter ones.

Bucks are easily agitated creatures, so it’s important to use this call and then shoulder your hunting rifle or hunting bow soon after.

Realistically, most deer calls don’t last forever. But Hunters Specialties wanted to make something that outlasted their competition to give them an edge, and they did just that.

Hunters everywhere agree that the call lasts consistently, and for a long duration of time.

This call is simple to use with its multiple bumps on the whistle base, and the smooth body to hold onto tightly.

It’s realistic, it’s inexpensive, and probably the most durable one you’ll ever have, and it’ll help you attract what you want whether it be a tiny fawn or a big buck.

Primos makes a ton of stuff, and we were a bit hesitant to see how this worked, but it pleasantly surprised us.

It looks like something out of a Sam Fisher novel, but in actuality, this discrete deer call creates realistic sounds with little to no blowing effort on your end.

It’s a revolver grunt call, meaning it will be better suited for mature bucks and sometimes does during mating season.

It focuses on a tone that challenges the buck, so be careful when it arrives, because you’ll need to be ready to take the shot.

Crafted out of durable plastic and a hard shell, this call doesn’t have any working parts outside of the chamber.

Simple call, quick results, and a realistic sound that lasts for years to come. You’ll save money now, but you’ll save time on each hunt later.

This is a different deer call. You’re not blowing on anything, you’re just putting the can down and confusing almost all types of deer such as whitetails, blacktails, or mule bucks.

This releases a scent and estrus bleats that tell the buck that a doe is ready to breed, and instincts immediately kick in.

It’s like they can’t control it; they’re drawn to the can call almost immediately.

You can place it down and leave it to lure the buck into a clearing, or you can keep it on-hand and lure them directly to you.

You can “hit” the can a few times when the buck is losing the scent and visibly drifting away, and it’ll snap their senses into place time and time again.

This revolutionary product takes advantage of the scent detection proficiency of deer and buck.

Whitetails have more olfactory receptors than a bloodhound, and 20’80 vision to boot, so they rely on their sense of smell during the day.

With this, they’ll play right into your hand. HOW TO CHOOSE THE RIGHT DEER CALL?

In addition to versatility and durability, which I’ve already covered, the adjustability of the grunt tube is another factor you need to consider before committing to a purchase.

However, all three aspects may be of secondary importance because what you really need to attract the type of deer you want is the right sound.

Mainly, there are three different sounds used in deer vocalizations:

Like an injured duck that’s on its last leg. Well, that’s what a deer sounds like anyway, and deer grunt calls get eerily close to that.

Most deer calls have different modes. A mature buck sounds different than a young buck and vastly different from doe and fawn. It’s all subjective.

A deer call is not a pleasant sound. While you can’t always hear the differences, there are breeding grunts and tending grunts, which come from different levels of maturity.

Calling a buck sounds like a very low growling that goes on for about eight seconds. Young bucks will try to imitate this, but they naturally sound a bit higher.

A good deer call can mimic all of them.

WHEN SHOULD YOU USE DEER CALLS?

Most often, you should use them early season.

Bucks will roam in bachelor groups while figuring out the alpha hierarchy of their group, and during this, they’re the most susceptible to nature’s call.

They’re going to be looking for a way to display dominance. For a buck, there’s no better way to do that than mating.

If you’re going to use a call that mimics any type of breeding sound, early season is how you do it.

You can also use The Can, which is listed above. It’ll do great at luring one or more bucks into view with breeding scents and the estrus bleating it releases.

So long as you have a gun that can handle a few shots, you could bag up a handful of buck all at once—just be sure to have a good game cart by your side to round them up.

But you shouldn’t just blindly use a call in the early hunting season. Wait until you see fresh tracks or have a visual—even from afar—of your prey.

It’s always better to have eyes on your target before you begin intimidating.

If you time them right, grunt calls will definitely work. Grunt calls challenge bucks, and can sometimes attract doe during mating season.

A grunt call can also challenge nearby juvenile bucks, so you need to be careful. While mature bucks are far more dangerous, juveniles are more headstrong.

They’ll go into a fight even if they can’t win it because instinct hasn’t fully kicked into high gear yet.

But they’re not the only type of call you should be using. A grunt call is just part of a stage of various calls you can use in succession with one another to achieve something greater.

Doe and fawn bleat calls are also great to use. They take a buck from enraged to curious. They hear the call, but they can’t see the doe or fawn anywhere nearby.

This gives you the element of surprise in almost every situation. So yes, grunt calls work, but they should not be solely relied on.

Diversify your hunting arsenal with a series of different calls for the best results.

HOW DO YOU RATTLE A BUCK?

There are more ways than one. Let’s look over some of the most common, and most effective.

Stick to the Rut

During, pre-rut, and post-rut, you’re going to be able to rattle bucks like it’s nobody’s business.

They’re already going nuts, you just have to time your calls, and you’re basically going to be swimming in trophies and freezers filled with venison.

This is the most lucrative time to use deer calls.

When you call from up high, out of the average 20/80 line of sight that deer have, you’re going to confuse them.

They might even get confused enough to wander around and look for the source. Use this disarray to your advantage.

Lure them out, line up your shot, and take it. Tree stands will be your best friend during this time.

Deer and buck are going to be much calmer; this is when they feed, before most of the predators are out and about. Use this false sense of security and take your shot.

How far can deer hear a grunt call?

In fact, studies have shown that deer can hear grunt calls from up to half a mile away. You need to be sure that you’re doing it from a hiding spot where the deer won’t be able to see you. If they see you before they hear the call, they will likely be scared and run away.

What time of day is best to call deer?

Deer calls are most effective in the last week of October, right up to the first weeks of November. In autumn time, deer respond to the call as much as possible.

How effective are deer calls?

This method of calling deer works great during hunting. However, to be more effective, you should use the right tool and choose the best time, like at the beginning of the hunting season.