A laser bore sighter can ensure you don’t waste any ammo checking that your gun barrel is still accurately calibrated to your scope. A laser bore sight is a small laser pointer made to fit in the barrel of a gun.

These items of hunting equipment come in a wide range of styles — from universal sighters to more specific sights made for different ammunition chamber sizes. A laser sighter will allow you to make sure your gun is still functional while on the go without causing you any additional hassle when trying to recalibrate your weapon.

Investing in a good laser bore sighter for hunting is crucial to ensure your shot is always on target, no matter how far you’ve hiked with your gun.

Making sure your hunting rifle or shotgun is perfectly aligned can guarantee you don’t miss out on the perfect trophy on your hunting trip. There are a number of different styles of bore sighters, with different designs and features.

Many are made to work with one specific caliber which is great if you only have one type of gun. But, for many of us who own a variety of rifle styles and calibers, a universal laser sighter is more useful.

That’s why our choice for the best laser bore sighter is the SiteLite Ultra Mag.

In Need of a Laser Bore Sighter? Check This One Out

Why is it best? Our Top Picks For Bore Sighters 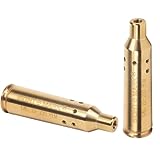 Let’s dive into the specifics and review each product individually. You can use the list below to jump and review specific models or you can read along and go through all the information of our buying guide.

You’ve been trying to align your gun, but you’ve used the cheaper laser bore sighter options in the past, and they didn’t quite cut it for you.

The SiteLite Ultra Mag Laser Professional Boresighter is basically the ultimate solution, and that’s because precision engineering went into this product like nothing we’ve ever used before.

The price is steep, but that’s because SiteLite includes a lifetime warranty with your purchase, always backing you up along the way.

From .22 up to .50 cal. handguns and rifles, this sight is designed to align every bore.

In your package, you also get an SRL scope leveler to help you right your crosshairs before you even think about the laser sight.

They’ve even included a DVD just so their president can show off a 255” Muley.

SiteLite is crazy about getting pinpoint, laser-focused accuracy, and nobody does it better than them.

To learn more about this product, please visit the respective Amazon link.

With super low output (for battery protection and less energy consumption), Wheeler’s bore sighter emits a bright green laser light, which is said to be more visible than red lights. However, you have the option to purchase this product with a red laser beam as well.

The visibility is definitely clearer than other laser sights we’ve used, and this is one of the two benefits this sighter has over its SiteLite rival. The other upside is the magnetic connection that can be used on any caliber rifle or handgun. Just pop it on the end of your barrel and you’ll be ready to go.

Built with a lithium-ion battery and a reflective site grid, this sighter will enable you to straighten out just about any bore you have in your arsenal.

When you’re done, pop everything back in the protective plastic case included with your purchase, and put it away until your next shooting session.

LaserLyte didn’t focus on the hardcore aesthetics of this bore sighter, but when it comes to functionality (which is all we really care about), it gets the job done right.

Visible from over 100 yards away in the middle of the night, the ultra-bright laser dot allows you to get your long-range ACOG AR sights and sniper rifle scopes fitted. It works well with iron sights too.

From .22 up to .50 calibers, this sight provides versatility and can cover all your weapons. This set comes with four adjustable adapters that allow you to pop them on different barrels of different caliber weapons, though the base design is fitted for three-inch barrels.

You’ll get additional batteries and a target included with your purchase, so you can just pop this open and straighten out your sights right from the get-go.

They didn’t make this sight look like a .50 cal. bullet for nothing. This NATO bore sight is simple but effective.

Your laser runs at less than 5mW, which conserves battery life, and it’s classified as a class IIIA for pinpoint accuracy.

Although Sightmark doesn’t disclose this, we found that this sight is best for up to 75 yards away, but anything beyond that might prove troublesome.

If you’re aligning a scope for 75 yards or less, this is the perfect sighter for you. Less energy consumption, a lower upfront cost, a fast gun zeroing sighting system, and a sleek and minimalist look that goes with your ammo bag is what you’ll get if you opt for this bore sighting device.

Some sights are big and bulky, but Sightmark wanted to keep things compact. Waste fewer shells, shoot with precision, and keep on living the dream.

With just six inches in total length, it fits into your barrel easily and shows an excellently bright laser that paints itself on targets up to 75 yards away.

Open the package, assemble the sight by slipping the battery in, and get to work. You can mix the concave and convex points together to let the laser come out. While ADAFAZ says it’s the only authorized store on Amazon for laser sighters, that’s a tall tale.

The product itself is good, but the company puts a lot of hype into their description. There’s a reason this sight is on the bottom of our list.

That being said, it does allow for precise zeroing in on targets as well as quick and accurate resetting. You get everything you need in the kit, so there’s no reason to buy additional tools. When it comes to durability, this sight doesn’t disappoint either, making it a decent option.

The Bushnell 743333 Boresighter grabbed our attention because it comes with three expandable arbors, a stylish carrying case, a graduating grid sighting reticle, and a limited lifetime warranty.

The arbors included with this sight enable you to use it with weapons ranging from .22 to .45 cal. And you know what might be the best thing about it? Its weight! It weighs only a pound!

The GoZier Tactical 223 Red Dot Laser Sighter surprised us (pleasantly, of course) with its 2” red dot sight which can be displayed at 100 yards. It’s made of high-quality brass and comes with six laser sight batteries. As its name suggests, this sight is caliber-specific, i.e. made to fit the .223 chamber. How Does a Laser Bore Sighter Work?

If this is your first time using a bore sighter, you might be wondering how exactly this hunting equipment item works. Well, let’s start by saying that the main goal is proper alignment. As you have noticed, all modern bore sighters are either placed onto or around the barrel.

This is important for a few reasons.

A laser module is designed to be pinpoint accurate so long as you have it properly aligned with the barrel.

Your barrel is already aligned (unless you’ve been banging it off of rocks or something), and you’ll know that because otherwise the bullet would have heavily decreased drag upon exit. That, and it would be visible.

So, we know the barrel is aligned properly. Good.

The laser falls on the target so you can aim the crosshair of your sight on it. This is done at multiple yard points, usually in increments of 25.

The laser is landing on the right spot, so aligning the scope with the laser will ensure you’re aiming properly going forward.

Over 100-125 yards (depending on the sighter), you’re going to experience some difficulty. You have to take gravity into effect at some point, and at 100+ yards, it starts factoring in ever so slightly.

It’s why military snipers are trained for up to 660 feet (200 meters) with bullet drop in mind.

Some marine snipers are able to shoot half a mile away, where bullet drop, wind speed, and leading (predicting target movement) also end up in the mix. They’re as accurate as they get. Yes, laser sights are accurate, but they’re not 100% guaranteed.

Manufacturing errors can occur and they’re only as accurate as the maximum range allows.

For instance, if you use a bore sighter rated for 75 yards to try to align a scope with which you can shoot targets 100 yards away, you might still have some accuracy.

Some. If you use a bore sighter rated for 75 yards and try to hit a bullseye that’s 300 yards away, you’ll hit everything around it before you nail that target.

Even if you purchase a new rifle with an aligned scope already attached to it, there’s still a chance that you won’t be shooting straight.

If you bought it in a gun store, it’s likely been tested or has been sitting there for a while, and that can be enough to misalign it ever so slightly.

A laser bore sighter is always going to be more accurate than simply trusting a new rifle with a pre-aligned scope.

At What Distance Should You Boresight a Rifle?

Most rifles should be boresighted at 100 yards, but not all sighters are going to give you that option.

The reason for this is that every single gun is different. Even different models (years) of the same gun series can be different in small ways.

For example, if you have an SKS, you can’t boresight it under 100 yards. Well, you can, but it’s not going to be accurate.

But what if you have a Garand?

You could bore that at 50 yards — it all depends on the specific gun in question.

Most bore sights aren’t going to go over 100 yards, and that’s okay; that’s plenty for civilian use in terms of hunting. Absolutely. If you aren’t bore sighting, then you’re betraying your own skill with a gun and getting frustrated for no reason.

Ever fired a shot with nothing but surety? Absolutely certain you were going to hit the target dead-on?

If it didn’t hit, it doesn’t mean you were wrong, it means your sight wasn’t aligned.

Bore sighting is necessary, but let’s talk about laser sighting.

You can bore your sight without a laser sighter, but I hope you have a ton of free time on your hands.

You have to spend a whole afternoon doing this, and even if you are able to complete it properly, it’s going to be slightly off.

Laser bore sighting is basically fine-tuning your sight to a point we just can’t see with the naked eye.

We have depth perception and long-distance vision, but having a measured, scientific approach like a laser sight removes all human errors from the equation.

The good thing is that, after a while, you’ll basically know how to bore the sight yourself.

You should still use a laser sighter for the foreseeable future, but if you drop your rifle while hunting in the woods and don’t have a laser sighter with you, you can at least align it enough to continue the hunt (this happens more often than people realize).

So yes, bore sighting is necessary if you want to have true aim and get the job done right. It’s a one-time investment, apart from possible battery replacements.