Anyone who has been to a shooting range has seen at least one gun target. Usually black on neon or white backgrounds, gun targets let people test out their accuracy on stationary objects.

The odd background coloration on some gun targets is used to differentiate the targets from their surroundings. Gun targets come in many different designs and styles. From standing targets to sticker targets meant to be placed around a shooting range, gun targets are useful for calibrating more sensitive weapons, as well as for practicing ranged accuracy.

They can be self-defense based, such as silhouette gun targets, or hunting-based targets meant to look like different animals. Higher-quality standing targets, such as spinning metal targets, are a good way to practice hitting moving targets.

Like any activity, practice makes perfect, and gun targets are a great way to get firearm practice in a controlled environment.

For The Shooting Experience, Take A Look At Our Top Gun Target 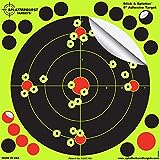 Let’s dive into the specifics and review target individually. You can use the list below to jump and review specific models, or you can read along and go through all the information.

The downside to paper targets is that they usually shred into pulp when you knock about half-a-dozen rounds into them.

Well, the cheap ones that they usually stock at the range, that is.

Splatterburst was sick of that. They made these targets with a durable construction so you can really get the most out of each one.

With a realistic size, you’re actually fine-tuning your aim to what real targets in a self-defense scenario would be. You’ve got to have that skill in your back pocket.

Good size, doesn’t tear horribly, but one of the reasons I personally like this target a lot is how vibrant it is.

Regardless of whether you go to an indoor firing range or you just attach this to some simple ¼” three-foot posts and stab them in the ground outside, it’s effective and visible in almost all conditions.

You need a target, and Splatterburst gives you more shots for your dollar, plain and simple. They love their design so much, that they actually patented it.

Splatterburst is more eccentric about targets than any manufacturer I know, and I think it’s why I’m so enthusiastic about their targets.

Made with a high density tagboard, this target doesn’t shred like standard paper.

This is like the B-side of the targets we just viewed a moment ago.

The head targets aren’t as in-depth, design wise, but the target itself has a vibrant color that’s easy to see in just about all visibility and environments.

As far as being economic about getting targets, this is your best bet. You get fifty of them for a flat price, which is more than agreeable, I’d say.

The non-adhesive tagboard is what distinguishes these from other manufacturers, and the different comes out to play when you’re actually firing.

Your bullet holes aren’t going to rip this thing apart, so long as you’re not using .50 cal shots.

The size is good for short to medium-range, but unless you’re using an ACOG scope, I wouldn’t use thse past about 50-60 yards.

Peel and stick these onto cardboard boxes filled with packing peanuts, or fabric, or old clothes that you forgot to donate.

Whatever the case is, these are perhaps the most versatile targets that Splatterburst has to offer.

I stick five of these onto a big sheet of plywood and bring it out to the local backwoods range from time to time.

Plenty of shots, plenty of space to do some damage.

If you want to size up like I did, the 100-count pack of targets is still dirt cheap, and comes with 1,900 different cover up points.

As always, Splatterburst makes their targets ultra vibrant so you can spot them in all conditions.

Even if it’s a bit misty out in the morning, I can still prop these up and spot them properly. The adhesive is strong, but moisture will eat through it, so be careful.

Tagboard. It’s basically the only thing I like to shoot at now.

It’s what Splatterburst uses across the board, and it’s because it doesn’t split or tear like normal paper targets when you shoot at it.

The bullets will still go through it, but it increases the life of every single target you have. The vibrant yellow and red colors give you a ton of visibility, though with these targets, they’re not as impressive as the other Splatterburst. The coloring is minimal here.

Something that I actually really like is the grid design.

It helps me gauge my shots better after measuring the size of each box, so I know exactly how to adjust my aim to hit the target in the center next time around.

That grid that I mentioned makes these virtually usable for about a hundred shots if you’re lucky, and they come in 25 packs for a low price.

Once again, doubtful that you’ll need to buy more targets for a long time.

Nothing sucks more than shooting at a target, and it’s gone after like five rounds.

Splatterburst uses their tagboard to prevent this from happening, so you get the absolute most out of each individual target, no matter what.

Per item, these targets are among the most inexpensive they’ve ever produced, which is why I was pleasantly surprised to find that they use more fluorescent yellow in this design than most of their other targets.

The enhanced visibility is always welcome.

With simple bulls-eye style targets on each piece of tagboard, you get five targets in total to shoot at.

I’d say that this is basically good for indoor and outdoor range use, but I’d keep it to about 50 yards.

If your kid has a BB gun or you’re thinking of getting them one, these are the perfect backyard targets to start practicing on.

It’s a great way to get the little ones into shooting, but still be comfortable with what they’re holding.

At the end of the day, Splatterburst targets are fantastic, it’s just a matter of knowing how much you shoot, and having enough targets to fit the bill.

From standing targets to sticker targets meant to be placed around a shooting range, gun targets are useful for calibrating more sensitive weapons, as well as for practicing ranged accuracy.

They can be self-defense based, such as silhouette gun targets, or hunting-based targets meant to look like different animals.

Like any activity, practice makes perfect, and gun targets are a great way to get firearm practice in a controlled environment.

Since there are a variety of types of targets (which we’ll cover below), choosing the best one is difficult.

It seems to us that the best target has to be the one that works well for a number of different shooting styles and scenarios.

Given the need for versatility, our top choice has to be the.

These wonderful targets are great for practicing self-defense shooting at both close and long range, and are really fun to use. Here are more details.

WHAT IS A REACTIVE TARGET?

It’s a lazy and broad term—it’s any target that reacts. I suppose since a paper target usually swings after you hit it (at an indoor gun range) that it’s considered reactive as well.

What I think of is a target, that’s usually made of metal, and it moves when you shoot it without being knocked over.

Some reactive targets act like ferris wheels; you shoot one section if it, it spins, and reveals a new target.

Pop-up targets with weights on the bottom, sort of like old-school punching bags, are also excellent reactive targets.

Knock it down, and it comes back up. It’s a lot of fun to see how many times in a row you can actually hit it.

Reactive targets are usually found at controlled indoor firing ranges. In most instances, if you’re buying targets to bring out to a secluded spot and shoot them, they will be stationary targets.

HOW TO MAKE METAL GUN TARGETS?

If you’re buying targets, paper are usually more cost-effective. If you’re making your own, metal is the way to go. The only problem is it can be a little tricky.

Without welding experience, you’re going to be out of luck in most of these situations.

Most metal gun targets are specifically made out of AR500 steel, which is thick and dense enough to shatter bullets on impact without majorly denting the actual target itself.

You need dense, tough metal to get the job done. Shooting targets are made from steel, and it’s not just something you can make at home.

If you tried to replicate AR500 steel at home, you would need about 2,800° F of heat. That’s a tall order, and a dangerous task to embark on.

At that point, you’re just better off buying targets online. It saves more hassle than the targets are work.

Unless you’re going to start your own reactive target company and sell steel targets, don’t bother embarking on that journey at home.

On that note, I had a friend who worked in a steel mill right out of high school. He would take scraps and make miniature targets for us to shoot at from time to time.

They didn’t hold up for long, but we got minimal use out of them. They were no AR500 targets, I’ll tell you that.

WHAT ARE THE PAPER TARGETS CALLED AT THE GUN RANGE?

They’re just called paper targets. There’s no technical name for them that you need to know.

Just specify paper versus metal if requesting them, otherwise you might receive the wrong ones.

Metal targets give a satisfying ding noise when your bullet hits it, but the goal is to see how accurate you are. In this regard, paper targets are far more efficient and cost-effective. Featuring a bullseye target in the center of a square or rectangular poster, these targets are perfect for general accuracy tests and are great at both close and far distances.

Circle or bullseye targets can also come in scattershot targets, which contain many bullseyes spread on one target.

These are useful for tracking birdshot spread or for adding variety to your target practice. These targets are inexpensive and you can buy them at most outdoors shops.

Silhouette gun targets are used for self-defense training, whether in a civilian self-defense setting or for military training.

These targets feature a human silhouette, either holding a weapon or unarmed and have many red “bullseyes” to indicate a lethal shot.

There are also silhouette targets for hunters. These include an outline of a deer or other animal and highlights the target shot areas on each kind of animal.

Both kinds of gun targets are useful for accuracy and are a good way to practice hitting smaller target areas from a distance.

Hanging targets are printed on a large piece of thick paper and are only usable for one or two practice sessions.

Sticker targets allow you to replace targets that are used more frequently. They are useful for targeting obscure areas for accuracy training.

Standing targets, such as the metal spinning target range, are multi-use.

These are good for shooting ranges and dedicated target areas, as they don’t need to replacement as often.

The main perk of standing targets is that you can use them multiple times.

With a wide range of different targets available, do your research to find out what gun target will take your firearm skills to the next level.