While some folks prefer to pursue fresh meat with fishing rods or firearms, there are still many people who prefer to use a bow or crossbow to hunt.

Even those who aren’t interested in hunting can appreciate the art of the bow and arrow.

In Hurry? Check Our Winner After 12 Hours Of Research 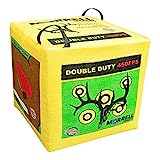 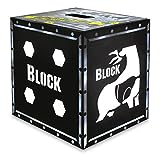 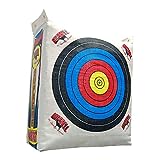 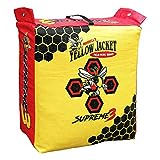 Let’s dive into the specifics and review each archery target individually. You can use the list below to jump and review specific models, or you can read along and go through all the information.

Archery is a serious skill and sport, and Morrell is serious about helping you improve.

You already know how to pull the bow string back, but how about hitting that perfect shot?

You get a 19” x 19” area with multiple targets that aren’t necessary nestled in the most usual spots.

The Double Duty target is able to give you 450 FPS of stopping power, so you won’t tear through the entire thing after a single Sunday in the backyard.

Dual tote handles make this easy to move around, while the 36 lb total weight actually makes it sturdy enough to just take arrow after arrow without quitting.

Morrell is the top name in archery gear for a reason. After using this target, you’d be hard-pressed to find anything that will beat your expectations. They raise the bar like that.

Built with an ultralight design in mind, this 16 lb archery target is the easiest to move on and off of the firing range out of every one we’ve tested.

It’s the XXL version as well, so you’re still getting plenty of surface space to fire upon.

With vibrant bright white and black images on each side of the cube, you get clear targets no matter what the shooting conditions are. Block Vault advertises this as having a very easy arrow retrieval method in place, and we’d have to agree with that.

This can stop 400 FPS crossbow bolts, but isn’t nearly that much of a hassle when you’re pulling them back out.

The thing is, this isn’t going to last as long as a Morrell bag. The filling is still great, but it will probably take about 200-300 less arrows than Morrell.

This is your go-to target if you’re taking it on the road though.

We all know Morrell is the king of archery gear, and they topped our list for a reason.

That being said, this simple archery target can’t be ignored. It’s built tough so that you can give it a beating, as can the weather.

With a 100% weatherproof finish, you can drop this in the mud and shoot at it until the clouds disappear; it’s not going to fail you.

Morrell’s filling stops high FPS shots of around 375 or higher, though since it’s taller than it is thick, I wouldn’t want to send crossbow bolts through the top corners.

Speaking of the corners, you’ll get two loops to slip some rope through and hoist this up in a tree for some added difficulty when testing out your shots.

Even when you pull your arrows out, there’s not much of an entry wound on the bag.

You’re not leaving major marks, even with higher gauge arrowheads.

The filling will outlast the visibility on the exterior target ring (not that it goes quickly), but you can always buy a Morrell cover to throw over the target when that happens.

So what sets this apart from the rest? Let’s start with durability. This takes field tip arrows – the beast of all arrows – like a champion.

It grabs onto them, but it doesn’t penetrate that deeply. The toss-up here?

In my honest opinion, the smaller target just gives me a tougher challenge, and I like that. It’s lightweight, so you can bring it to and from the range or archery club whenever you wish.

Because of the material and simplistic design, this won’t look visibly torn up like other targets (with colored bullseyes) will.

It will retain its luster, and the filling will go through hell and back if you let it.

Last but not least, it’s cheap. If you’ve been daunted by the prices on some of these targets, we don’t blame you, but Field Logic and the Block GenZ won’t blame you either.

They want to give a cheaper, sturdier solution that many other targets on the market. They’ve hit their mark, so now it’s up to you to hit yours.

The Yellow Jacket is a personal favorite of a few people I know, and I can see why—it’s the least expensive Morrell option you have at your disposal.

Propel a 400 FPS bolt through the air with zero wind resistance, and it’s still going to be standing. Morrell made this, like all of their archery targets, tough as nails.

Plop it down and go to town. This is fitted to last for thousands of shots, and you can probably still get your money’s worth after the fact.

With or without a discount from your Prime membership, this is the closest you’re going to get to Morrell’s legendary quality.

From the bright yellow frame to the blood red targets, this gives you ultimate visibility at any range.

When that color starts to fade from arrow number 2,000, the filling won’t give up on you.

You can simply buy a cover from Morrell to replace it, and get a second life out of this target.

If you have been looking into it, you might be wondering exactly what’s an archery target and why you need to have it.

Learning how to properly handle a bow and arrow takes a considerable amount of dedication and practice.

Though you might be able to identify the basics pretty quickly, putting them into action is a whole new matter.

Of course, you do need to understand the process before you begin handling the equipment. Just like with fishing gear, you don’t want to inadvertently damage anything.

WHAT IS AN ARCHERY TARGET CALLED?

That being said, there are different types of targets available. You have box targets, which are quite simply big cubes with filling that you can sink arrows into.

Then you have bag targets, which are mostly what we’ve been reviewing today. They’re filling in malleable bags that you can just place down wherever you’d like, and get straight to work.

DIY targets are usually made out of hay, and you have standard wooden targets which are just basically bit plywood discs on two-legged stands. Which one is right for you?

In our opinion with a combined 30+ years of archery experience, bag targets are the way to go, every single time.

WHAT TYPE OF FOAM IS USED FOR ARCHERY TARGETS?

Most brands make their own proprietary blend of foam to sell you on the idea that theirs is somehow superior.

If an archery target has thick foam inside, you’re good to go. If it has packing peanuts inside, it’s not going to do well.

The different types of foam will have various FPS ratings, but on average you won’t see anything under 350, regardless of what foam type is used.

For example, Chunk uses a Mo’Foam proprietary blend that withstands a ton of shots, but there’s no independent proof that it’s any better than the foam Morrell uses.

HOW TO PLACE YOUR ARCHERY TARGETS?

While you don’t have to actually measure the distance, be familiar with how far away 70 meters (210 feet) is. In Olympic archery, they set the targets from 70 to 90 meters away.

Does this mean you have to play like the Olympians do? Of course not. But if you put them much closer, where’s the challenge? Where’s the fun?

If you really want to challenge yourself, and you have a safe spot, you should try setting your target about 110 meters away. This is longer than the length of a football field.

You’ll have to account for arrow drop, wind speed, arrow weight, and a ton of other factors, but landing those shots are only going to prove how excellent of an archer you are.

HOW OFTEN SHOULD YOU BUY NEW TARGETS?

About every 2,000 to 3,000 arrows is the average, but don’t just keep tabs and dump your archery target when you hit a certain number.

Did you hit a lot of bullseyes? Then the outer rim is probably still intact.

Are you trying to get your longshot game down and hit 100m+ targets? This doesn’t need that much resistance to pull it off.

Keep it until the arrows land in it, and fall out on their own right after impact. There’s no point in throwing away something that still works perfectly well.

Here is a video discussing various types of archery targets: